The Bremerton Puget Naval Shipyard was established in 1891 after the Navy purchased 200 acres of land for about $10,000. The shipyard was the first repair facility and dry dock in the Northwest United States, Washington, that was capable of handling large ships. During World War I, war efforts pushed for operations to expand and Bremerton Shipyard constructed hundreds of new ships and boats.

In the 1930s, construction shipbuilding orders increased, even more, forcing the shipyard to increase its workforce once again. The shipyard continued expanding throughout the Great Depression before shifting its primary mission to repairing the Pacific Fleet damaged during World War II. As the war continued, the shipyard employed over 30,000 military troops and civilians to keep up with repair demand. Few ships were built during this time, including three Coast Guard Cutters.

Although military shipyards like Bremerton helped pioneer environmentally safe methods of deactivating and recycling nuclear-powered ships, sites became contaminated with lead, mercury, zinc, and other toxins. The Bremerton Naval base became an EPA Superfund site in 1993. In 2007, the U.S. Navy transferred the property to the City of Bremerton, though the site remains contaminated.

History of Asbestos Exposure at the Bremerton Naval Shipyard

The military used large amounts of asbestos until the regulation of the toxin occurred in the early 1970s. Its resistance to high heat and corrosion made the material seem great for insulation uses. The Navy worked with contractors who used materials manufactured with asbestos in shipyards such as the Bremerton shipyard.  Any amount of asbestos contact puts someone at risk of developing cancer.

Certain jobs involving high levels of exposure, however, increased the risk significantly. Troops were most often exposed to asbestos in Navy ships and Army barracks. Over time, veterans or former workers began filing claims against Bremerton Naval Yard and the manufacturers of the asbestos products. 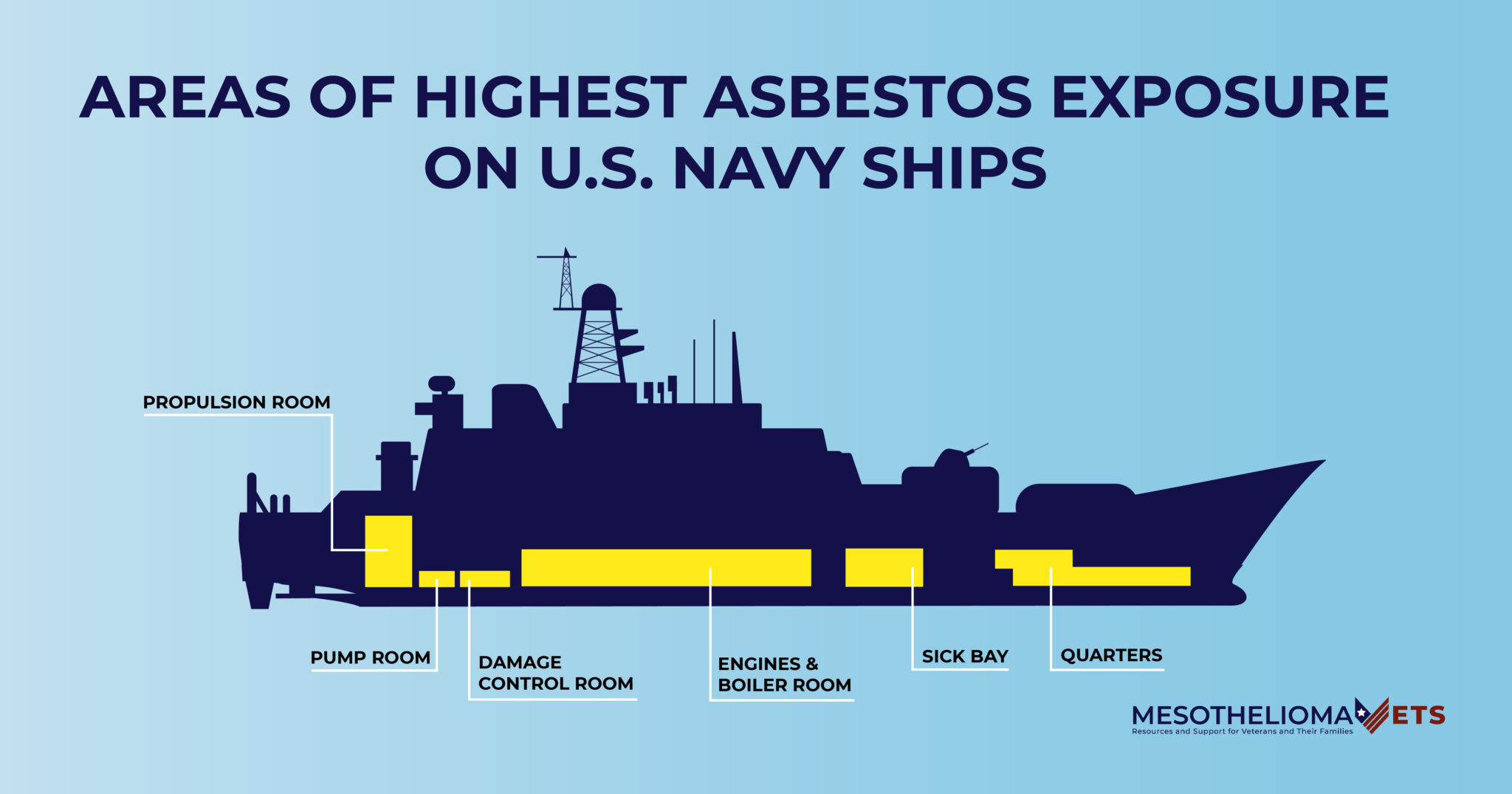 Early findings of the potential dangers of asbestos exposure were ignored and veterans at Bremerton Naval Shipyard were not warned. Sailors worked and lived at their asbestos-contaminated worksite, increasing the risk of exposure. Certain occupations required the direct handling of asbestos products, including pipefitters, machinists, maintenance workers, electricians, and boilermakers. Long shifts among poorly ventilated ships caused airborne and secondhand asbestos exposure.

Throughout the shipyard’s expensive history of shipbuilding, thousands of workers were responsible for the overhaul, repair, modernization, and decommissioning of ships and submarines. These jobs generated large amounts of hazardous wastes that penetrated the surrounding air, soil, and groundwater.

In addition, many Navy veterans were exposed to asbestos while working in civilian jobs at shipyards after service. Today, asbestos exposure is the leading cause of mesothelioma, a rare and aggressive cancer that forms in the lining of the lungs.

What Ships Are Stationed in Bremerton?

The use of the Bremerton Naval Shipyard often varied. During World War I, the shipyard constructed dozens of submarine chasers, submarines, mine sweepers, tugboats, ammunition ships, and other small boats. After the war, the shipyard reduced its workforce and focused on ship repairs and overhauls. Prior to the 1930s, the Navy constructed only a few ships at Bremerton; the U.S.S. Medusa, the U.S.S. Holland, and the U.S.S. Louisville.

As World War II approached, Navy Yard Puget Sound was the main naval shipyard on the West Coast and the only one large enough to hold aircraft carriers and battleships. Tensions with Japan prompted the shipyard to reduce shipbuilding and focus its attention on the repair of Pacific Fleet warships damaged during the war.

Today, Bremerton Naval shipyard stores both active and inactive ships and submarines. A few of the more popular decommissioned ships at Bremerton include:

Active warships assigned to Bremerton include:

Decades of asbestos use put thousands of workers at Puget Sound Naval Shipyard at risk of developing asbestos-related cancer or another related disease. After a diagnosis, victims can file lawsuits against companies that manufactured products with asbestos knew it was dangerous but continued putting Navy veterans,  Coast Guard veterans, and citizens at risk.

Mesothelioma patients have several legal options to cover treatments and other associated costs. Working with an experienced mesothelioma attorney may speed up the process of securing compensation through asbestos lawsuits, settlements, or trust funds.

Veterans who were diagnosed with mesothelioma may be eligible for VA compensation. Learn about filing eBenefits on the VA Website.

The Bethlehem Steel Shipyard Corporation was one of the largest shipbuilding companies in the U.S. and was responsible for asbestos exposure.

The Brooklyn Navy Yard was one of the United States' largest shipyards. There, thousands of veterans came into contact with asbestos.

The Long Beach Naval Shipyard operated from 1938 until 1997 as a ship repair facility for the U.S. Military.