Marine Corps air station (MCAS) New River is a military base located near Camp Lejeune, North Carolina. Marine Corps air station New River is the primary location for the Marine Corp helicopter base in Jacksonville, North Carolina. As seen in the news recently, just a short distance away, lays Camp Lejeune, a prominent military base known for being a superfund site which exposed thousands of veterans and servicemembers to deadly contaminents.

The two military bases are just a short 8.8 miles away from one another and share the New River. Due to the close proximity of the two military bases, Camp Lejeune could have inadvertently exposed air station New River Veterans to deadly toxins. Learn more about the toxins and those possibly exposed to contaminated water in North Carolina.

MCAS New River is the primary location for the United States Marine Corps helicopter base that resides near Jacksonville, North Carolina. The purpose of the air station is to provide training to the units of the Marine Corps aviation crew while improving the lives of military personnel, their loved ones, and other workforce assigned to the air station. The New River air station near Camp Lejeune hosts about 6,000 Marines, sailors, and airmen and employs over 600 civilian employees.

Veterans who were diagnosed to mesothelioma and other cancers while serving at New River Air Station may be eligible for VA compensation. To find out if you qualify, speak with a patient advocate today. 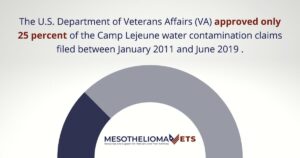 Although New River is not part of Camp Lejeune or the 2022 Act, they are a short distance from one another and share a water supply source. Only around 9 miles from one another, citizens can move from one base to another in just 15 short minutes. Until 1982, the shared water source, the New River, was contaminated with toxins. Contaminants in the water such as volatile organic compounds (VOCs) are known to cause serious medical conditions.

The VA presumes certain disabilities are connected to military service and can award compensation to Marine Veterans and others affected. The VA’s current list of Camp Lejeune presumptive conditions includes:

In addition to the above list of Camp Lejeune presumptive illnesses, the recently passed PACT Act will state further presumptions. The PACT Act, signed into law by President Joe Biden, will extend coverage to Camp Lejeune and New River Air Station victims. This comes as a big win for veterans and servicemembers who served at shipyards and other bases where contaminants likely exposed them to deadly diseases.